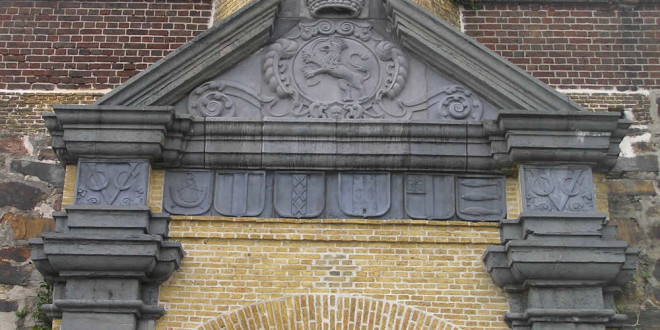 In March 1594 some Dutch merchants founded a “Company of Far Lands” at Amsterdam. Their objective was to send two fleets to the East Indies. The first fleet of four ships reached Bantam and returned to the Netherlands in August 1597. Only three ships with a small cargo of pepper returned, but it covered than the costs of the expedition. The next step to this first enterprise was the founding of five different companies (voorcompagniën). In 1598 twenty-two ships left Dutch ports for the East Indies. In 1601 sixty-five ships were bound for the East Indies.

As early as 1598 the Staten Generaal suggested that various companies should amalgamate. On March 20, 1602 finally from a fusion of six small Dutch companies the VOC (Verenigde Oostindische Compagnie) was born. The unification into one company did not happen spontaneously, but was enforced by the Dutch government. The charter (octrooi) was valid for 21 years. The Staten Generaal granted a monopoly on the trade in the East Indies to the Dutch East India Company (Verenigde Oostindische Compagnie or VOC). The area of trade granted to the company was called the octrooigebied (trade zone). Its purpose was not only trade; the Compagnie also had to fight the enemies of the Republic and prevent other European nations to enter the East India trade. During its history of 200 years, the VOC became the largest company of its kind, trading spices (nutmeg, cloves, cinnamon and pepper mainly) and other products (tea, silk and chinese porcelain). The VOC was virtually a state within a state. 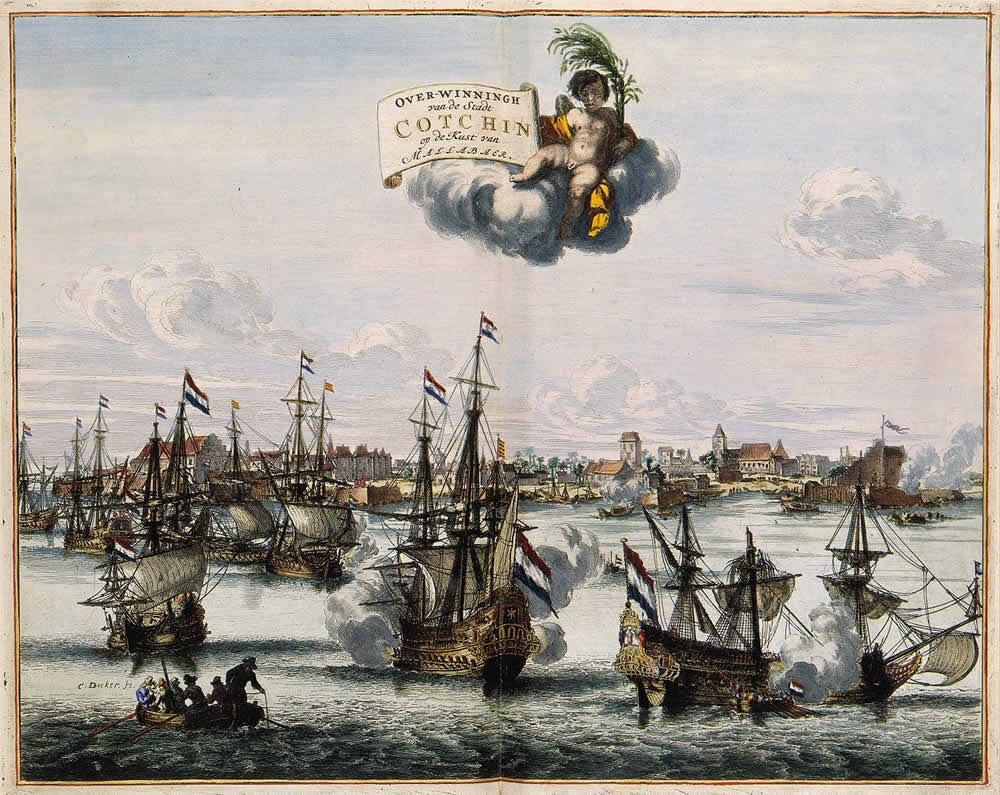 The capture of Cochin and victory of the Dutch VOC over the Portuguese in 1656. Atlas van der Hagen

The new company was divided into six regional boards (kamer), which were established on the former seats of the pioneer companies: Amsterdam, Middelburg, Delft, Rotterdam, Hoorn and Enkhuizen. Each of the regional chambers of the VOC had a board of directors. The Heeren XVII, the government body of the company, was a court of seventeen directors, they were chosen from among the regional directors. Eight of the Heeren XVII represented the Amsterdam chamber, four the Middelburg and one representative from each of the other chambers (Delft, Rotterdam, Hoorn and Enkhuizen). The seventeenth director was provided on a rotation basis by the chambers except Amsterdam.

The company was from the beginning very successful. In 1605 the VOC captured Ambon and Tidore and drove the Portuguese from the Moluccas and in 1619 Batavia was founded. During the following years the Portuguese power in the East was destroyed: the Dutch estabilished factories in Coromandel, Bengal, Iran, Gujarat, Formosa (Taiwan), founded Cape Town as naval base along the route to the East, conquered Portuguese Malacca (1641), Ceylon (1656-1658) and the Malabar coast (1661-1663). The company extended its trade network from Africa, Arabia, Persian Gulf, India, East Indies to China and Japan in the Far East.

The total figures for the two centuries of the Company’s operations for trade turnover, shipping and personnel are impressive. The business was on a much larger scale in the eighteenth century than it had been in the seventeenth. In 1608 the Dutch had 40 ships manned by 5,000 men in Asia, 20 ships with 400 men off the coast of Guinea and 100 ships with 1.800 men in the West Indies. In 1644 the VOC alone had 150 ships and 15,000 men and in the last quarter of the 17th century it had in the East Indies over 200 ships and 30,000 men. For instance in total the VOC fitted out some 4,700 ships, nearly 1,700 in the seventeenth century and some 3,000 in the eighteenth. Between 1602 and 1700 317,000 people sailed from Europe on these ships, while between 1700 and 1795 the total reached 655,000. Trade figures confirm the growth of the business after 1700. The expenditure on equipage, that is to say shipbuilding and outfitting as well as the money and goods that were sent to Asia, reached the sum of 370 million Dutch guilders (fl.) between 1640 and 1700, and fl. 1,608 million in the years 1700-1795. In these periods the purchase prices of the return goods shipped home from Asia reached fl. 205 million and fl. 667 million respectively; the sales prices of these return goods were fl. 577 million in the first period and fl. 1,633 million in the second.

The VOC was formally dissolved on 31 December 1795 and its debts and possessions taken over by the Batavian Republic. 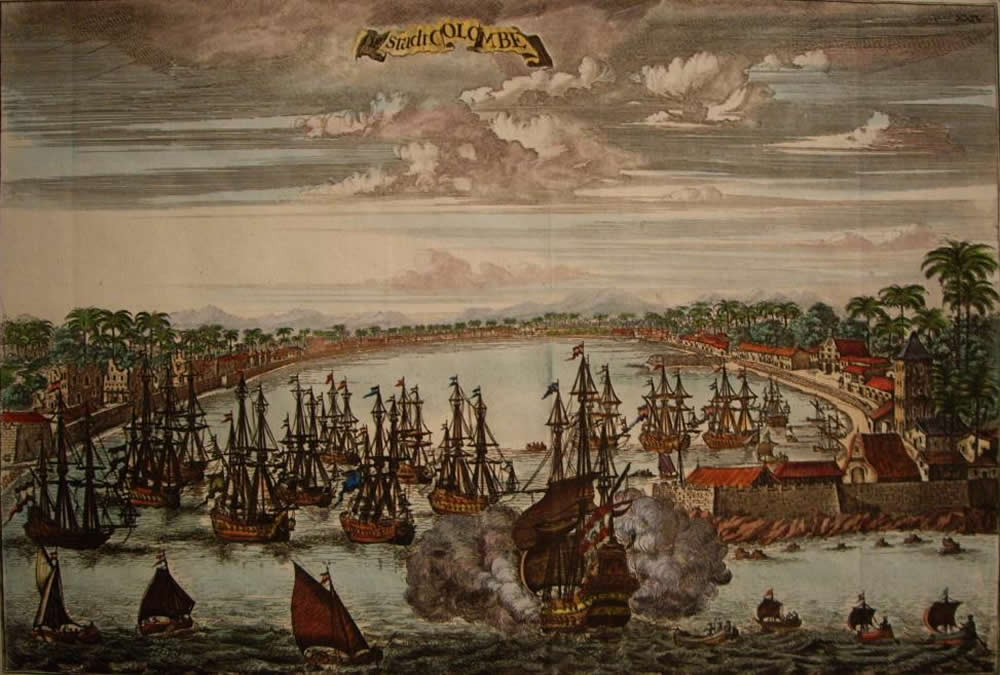 MAP OF VOC SETTLEMENTS IN ASIA 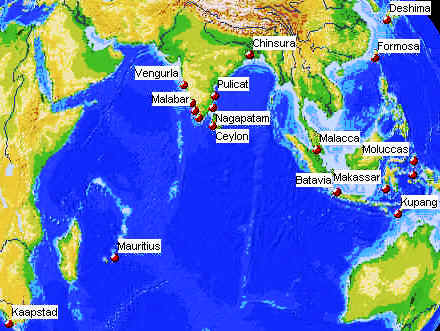 Map of the main VOC settlements in the East (1660s.). Author Marco Ramerini

LIST OF THE GOVERNORS-GENERALS OF THE DUTCH EAST INDIES