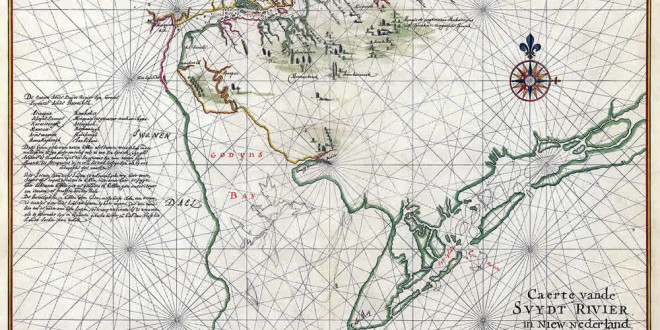 The King of Sweden as early as 1624, encouraged by Willem Usselinx, was planning an expedition to North America, but the Thirty Years’ War stopped his plans.

In 1632 the Walloon, a former Governor of Dutch New Netherland, Peter Minuit offered his services to Sweden. He planned to establish a Swedish colony in North America. Two Swedish ships with Dutch, Walloons and Flemish colonists and Kalmar Nyckel and Gripen or Grip arrived on the South River (Delaware) under the Walloon commander Peter Minuit in March 1638. Here a small piece of land was purchased from the Lenape Indians and a fort was built and named Fort Christina. The fort was garrisoned with twenty-four men. The colony of Nya Sverige was founded. The Dutch, who were at Fort Nassau, strongly protested.

In 1640 the new Director Peter Hollander Ridder arrived at Fort Christina with reinforcements and a goodly number of Swedish colonists. Between 1638 and 1656 the Swedes sent 12 separate expeditions to the colony. In the fall of 1640 more Dutch colonists settled near Fort Christina and in 1641 two ships with more Finnish colonists arrived from Sweden. In 1641 the Dutch associates of the Company were forced to sell their part to the Crown of Sweden. During the first years of the Nya Sverige colony the immigrants were almost entirely Dutch. In 1642 a windmill was inaugurated at Fort Christina.

A new company, the New Sweden Company, was formed and a new Governor, John Printz, was appointed; he arrived in the colony in February 1643. The new Governor began to build a new fort, called Fort Nya Göteborg, on the island of Tinicum. Here he also built a Lutheran church (consecrated on 4 September 1646) and decided to move the capital of the colony from Fort Christina. In the same time another fort, Fort Nya Elfsborg, was built on the East bank of the South River (near today’s Salem, New Jersey).

Swedish colonists settled in Upland on the West side of the South River between Tinicum island and Fort Christina. A blockhouse called Fort Nya Vasa was built on a creek near the Schuylkill. Fort Nya Korsholm was founded on an island west of the mouth of the Schuylkill (near present-day Philadelphia). At this time New Sweden counted a population of 200 inhabitants. This Swedish expansion disturbed the Dutch. In 1648 the Dutch built a fortified trading post called Fort Beversreede on the East bank of the Schuylkill to stop the Swedish expansion.

In 1651 the Dutch under Peter Stuyvesant took the offensive and with 120 men he dismantled the old Fort Nassau and Fort Beversreede and built a new fort, Fort Casimir, on the West bank of the South River (near today’s Newcastle, Delaware) not far from the Swedish Fort Christina. The Swedish Governor Printz left the colony in search for help in Sweden in late 1653. 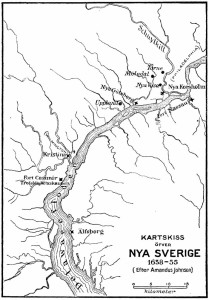 Meanwhile on 2 February 1654 a new expedition of 350 emigrants under the command of the new Governor Johan Rising sailed for Nya Sverige/New Sweden. On 20 May 1654 the Swedes anchored near Fort Nya Elfsborg, which was found in ruins. On 21 May, when this expedition arrived off the Dutch Fort Casimir, the few Dutch soldiers in the fort gave in to the Swedes. They renamed the fort Trefaldighet (Trinity); thus the whole South River was now in the hands of the Swedes. They numbered 500 colonists.

The Dutch reinforcements arrived in 1655. When this contingent of more than 300 soldiers appeared, the whole Nya Sverige gave in after some resistance on 15 September 1655. After the Dutch conquest the settlements on the South River were ceded to the city of Amsterdam. Fort Christina was renamed by the Dutch Fort Altena. In 1657 about 150 Dutch colonists settled at Fort Casimir, which was renamed New Amstel. In 1662 a Mennonites’ colony was founded at Whorekill (Lewes) on the South River. In October 1664 an English force conquered the whole Dutch colony. 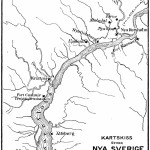 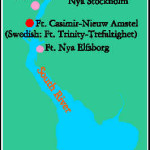 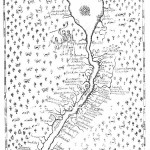 Map of New Sweden around the Delaware River 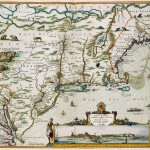 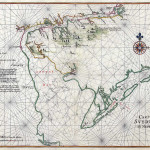 – Acrelius, Israel “A history of New Sweden: or, the Settlements on the river Delaware” 468 pp. The Historical Society Of Pennsylvania, 1874 (1759), Philadelphia, USA.

– Weslager, C. A. “New Sweden on the Delaware 1638-1655” 219 pp. The Middle Atlantic press, 1988, Wilmington, Delaware, U.S.A. The birth of New Sweden company, the Swedes build fort Christina, the Printz expedition, Printz expands New Sweden, trouble with the Dutch, Rising captures Fort Casimir, the fall of New Sweden, aftermath, sights to see. “Dr. Weslager, offers a charming account, through the eyes of a grandfather and grandson, of present-day places to visit that remind us of centuries past.”

I have published some writings on the history of geographical exploration and colonialism, particularly on the spice islands, the Moluccas. I have designed and written some internet sites including the www.colonialvoyage.com site dedicated to the history of geographical exploration and colonialism. Then the site www.borghiditoscana.net dedicated to my region: Tuscany. As well as many other travel sites in different languages. Traveler, writer of online tourist guides. I research and write about history. Finally I am passionate about astronomy and photography. 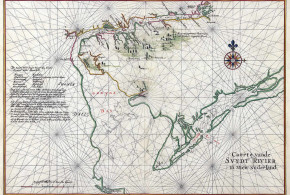 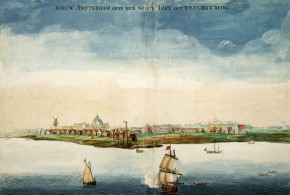 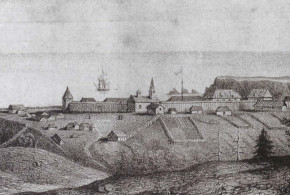 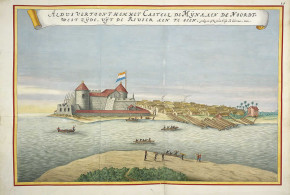