The French ports of Normandy, especially Rouen and Dieppe, had a flourishing textile industry and thus became the principal competitors in trade for Portugal in Brazil in the 16th century. Due to the presence of vast forests of “Pau Brasil” on the Brazilian coast (used in the process of cloth colouring) the French soon started to trade with the Indians. The first voyage took place in 1503-1504, when the ship “Espoir” reached the Brazilian coast. After this first contact the French expeditions became more frequent.

In 1531 two French ships and 120 men under the command of Jean Dupéret landed on the Brazilian coast. On the island of Santo Aleixo (near Recife), named by the French “Ile Saint-Alexis”, they built a fort and a trading centre. This French settlement was short-lived. The Portuguese captured the French ships on their return voyage to Europe and in December 1531 they put the French fort under siege, which forced the French garrison to surrender.

In the 1550s the area from Cabo Frio to Rio de Janeiro was under French rather than Portuguese control. For about five years between 1555 and 1560 the French maintained a base on a little island in the Bay of Guanabara (Rio de Janeiro): Fort Coligny.

The Calvinist Nicolas Durand de Villegagnon was sent to Brazil in 1555 in order to materialise the French presence there. On 14 August 1555, with three ships, 600 sailors and colonists (French term: colons), he started for Brazil.

The French expedition arrived on 10-15 November 1555 in the Bay of Guanabara and landed on a deserted island, today Villegagnon island. Here Fort Coligny was built and good relations were established with an adjoining Indian village. The members of this first expedition were mainly Bretons and Normans and they were fairly subdivided between Catholics and Protestants.

A short time later, on 7 March 1556, arrived a second expedition of three ships with 190 men. The colony had good development prospects, but the hard and intolerant rule of Villegagnon stopped the promising growth of the colony. Villegagnon’s oppressive rule obliged a large number of colonists to leave the colony. Among others, some Huguenots returned to France, where their reports brought about the abandonment of an expedition of 700-800 colonists.

In 1559 Villegagnon also returned to France, leaving the command of the colony to his nephew Bois-le-Comte. Portugal, not disposed to tolerate the French presence in his possessions, sent an expedition of 120 Portuguese and 1.000 Indians under the command of Mem de Sá, Governor General of Brazil (1558-1570). After two days and two nights of savage fighting the Portuguese destroyed the French colony on 16 March 1560. The surviving 70 Frenchmen and their 800 Indian allies, demoralised, abandoned the fort and sheltered among other Indians.

Like W.J. Eccles writes in his book “France in America”: “For a century, French traders had challenged the Portuguese hold on this vast region, with little or no aid from the Crown. But for religious dissension in Rio de Janeiro and the unfortunate character of Villegagnon France rather than Portugal might well have established a vast empire in South America.”

In 1590 under the command of Adolf Montbille a French expedition settled in Ibiapaba (Viçosa-Ceará Here the Frenchmen established a settlement and a fort, and they traded “pau Brasil” with the Indios that had settled in the vicinity of the French trading station.

The French stayed here in peace with the natives for about 14 years, but in 1604 a Portuguese expedition under Pero Coelho attacked the settlement and, after a fierce battle, forced the Frenchmen to surrender.

On 24 June the ships arrived at the island of Fernando de Noronha, where they stayed until July 8. Here they found one Portuguese and 17 or 18 Indian slaves. All were removed to Maranhão. On 29 July the French landed on the island “Pequena do Maranhão”, which was found deserted. This island was named by the French Ile de Sainte-Anne. From here the French moved to the island “Grande do Maranhão”, where they found some ships from Dieppe and Le Havre with 400 Frenchmen that were trading with the Indians. Here the Capuchins built the convent of Sainte Françoise and near it a fort, named Fort Saint-Louis, was also built. On 20 December 1612 the missionary chapel was inaugurated.

Here the French lived in peace for nearly two years. In 1613 the leaders of the settlements resolved to return to France in search for reinforcements. After some attempts at the Court they succeeded in preparing a reinforcement expedition. At Easter 1614 the ship “Regent” with 300 Frenchmen left for Maranhão. On 14 June the ship cruised along the Portuguese fort of Ceará, and on 18 June the expedition arrived at “Buraco das Tartarugas” or Jaracoará, where another Portuguese fort was to be found. Despite the obstacles the French reinforcements arrived unharmed in Maranhão.

Due to the continuous presence of French ships in the area the Portuguese built several forts to control the coast with the purpose to stop the French with their trading. In 1611 or 1612 the Portuguese had founded the fort of Ceará, named Nossa Senhora do Amparo; in August 1613 they also founded the fort of Jaracoará, named Nossa Senhora do Rosário.

On 26 October 1614 a Portuguese force of 500 men (Portuguese and Indians) arrived on terra firme near the French settlements with the intent of driving the French out. The Portuguese encamped in Guaxenduba and there they built a fortified camp called Forte de Santa Maria. The French of Maranhão, being superior in number, decided to take the initiative and on 19 November 1614 7 ships, 50 guns and an armed force of 200 Frenchmen and 1.500 Indios attacked the Portuguese fort. The attack was, however, an overwhelming defeat for the French.

On 27 November 1614 a one-year armistice was signed with the purpose to permit the Kings of France and Spain to settle the issue diplomatically. It was also decided to send Portuguese and French emissaries to Europe to explain the question. Thus the ship “Regent” left for Europe with on board the Portuguese and French emissaries on 16 December 1614. The result of this mission is not known.

However, reinforcements for Maranhão never arrived from France. Meanwhile, on 1 November 1615, a Portuguese fleet of 9 ships and several hundred men under the command of Alexandre de Moura arrived in front of the French settlements. The Portuguese landed on the island “Grande do Maranhão” and entrenched themselves on the promontory of São Francisco. The fortification was named “Quartel de São Francisco”. On 3 November 1615 the French – already demoralized – surrendered without fighting.

– Parkman, Francis “Pioneers of France in the New World” University of Nebraska Press, 1996

2014-01-14
Marco Ramerini
Previous: Dutch in Chile: Hendrick Brouwer’s expedition to Valdivia
Next: The Dutch in Brazil

The Forts of Fernando de Noronha 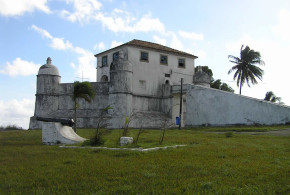 The forts of Salvador (Bahia)

Governors and Viceroys of Portuguese Brazil, 1549-1760

Igarassu: the oldest Church of Brazil 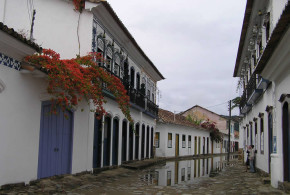 Paraty a Colonial Town in the state of Rio de Janeiro