Continued from: The new Dutch occupation and the reconstruction of the Fort

A new threat encumbered on the Dutch possessions of Ceylon, it materialized in March 1672 in the shape of a great French fleet, that of admiral de la Haye. In the years between 1665 and 1670 the French governed by Colbert and with the aid of François Caron, a man of great experience and former director general of the VOC in Asia, had developed a plan of expansion in Asia to the expenses of the Dutch. Part of this plan was also the foundation of an important trading station in Trincomalee.

The French fleet under the command of the lieutenant general of India, Jacob Blaquet de la Haye on 29 March 1670, at the time of the departure from the French port of Rochefort, was composed of 9 vessels with 2,250 men on board and 251 guns. At their arrival in the bay of Trincomalee on 22 March 1672 the French fleet represented an enormous naval power for the Indian Ocean.

In March 1672 at the arrival of the French fleet of de la Haye and Caron the Dutch abandoned and burnt their outpost of Kottiyar Bay, whose garrison was sheltered in the fort of Trincomalee. The Dutch left 21 guns in their destroyed fort. The Dutch garrison of Trincomalee was forced to the defensive and remained inside the walls of the fortress to observe the movements of the French.

The French had chosen the wonderful bay of Trincomalee/Kottiyar as base for their future operations in Asia. Under the eyes of the Dutch, barricaded in their fort of Pagoodsberg, the French occupied and fortified the two islands at the entrance of the bay: calling them ‘Isle du Soleil’ (‘Dwars-in-de-weg’) and ‘Caron’ (“Compagnies Eyland”) and also occupied the outpost of Koddiyar Bay. The official Boisfontaine with 30 soldiers was soon sent to the court of Kandy in the capacity of French ambassador. He was well received by the king, who hoped to be able to drive away the Dutch, with whom he was at war, from the island.

On 28 May 1672 the French signed a treaty with Raja Sinha, in virtue of which the bays of Trincomalee and Kottiyar were ceded by the Singhalese to the French. On this occasion some pillars were raised to delimit the borders of the ceded territory. The main problem for the great French fleet was the food supply. From the moment the food dispatching from Kandy was not sufficient to feed such a great navy, the French sent three ships to India in search of supplies to resolve this problem.

A few days after the signing of the treaty with the Singhalese the Dutch fleet of van Goens arrived in the bay. The Dutch initially tried with a disembarkation in Tambalagama to stop the supply line, which came to the French from the interior. But a prompt attack by the Kandyan troops forced van Goens to withdraw his men to the ships. The Kandyans asked the French for assistance, to attack the Dutch jointly, but the French refused being still formally in peace with the Dutch. This refusal cooled down the enthusiasm of the Singhalese towards the French expedition.

The Dutch instead did not take care of being in peace with the French and at the first opportunity they attacked and succeeded in capturing two vessels, which the French had sent to India in search for supplies. A third vessel was forced to return. For the French troops the situation became more and more dramatic, in spite of the aid of Raja Sinha. The diseases and the lack of food provoked many death casualties among the French. On 9 July 1672 admiral de la Haye, after having sent another ambassador, de la Nerolle, to the court of Kandy, decided to sail with the entire fleet in search of aid, leaving in the fortification of the bay a garrison of 100 men and two boat vessels. The Dutch did not lose time. They attacked the garrison and the French, barricaded in their fort, were soon forced to surrender. A large contingent of Kandyan troops reached Trincomalee a few days after the departure of the French fleet. But it was too late by now. The short French intermezzo came to an end. Thus the hopes of the Kandyans to drive away the Dutch from the island did not materialize.1

To be continued by: The consolidation of the Dutch presence 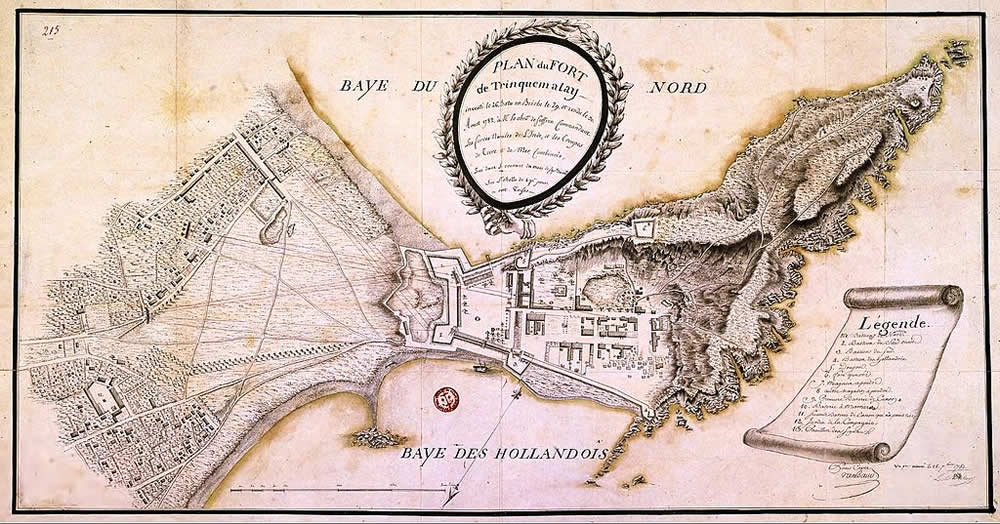 Plan of Fort Trincomalee, made by the Chevalier de Suffren in August 1782