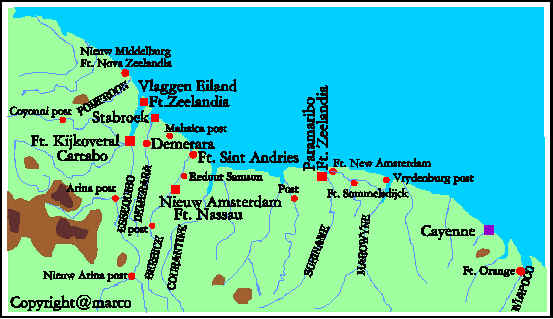 Around 1600 Spain had occupied in the Caribbean four large islands: Cuba, Hispaniola, Jamaica and Puerto Rico. These islands together with Mexico and Central America as far south as Guatemala formed the viceroyalty of New Spain.

The Lesser Antilles were left unoccupied by Spain due to the ferocity of their Carib inhabitants, the little gold and silver found and because the north-east trade winds rendered them difficult to accede from Cuba and the other islands under Spanish control. The remaining Spanish colonies formed the viceroyalty of Perú. It claimed all South America except Guyana and Brazil.

On the Caribbean coast of South America Spain had its main settlement in the town of Cartagena, down the coast to Guyana they had a few outposts as Cumaná, San Thome and the island of Trinidad. Portugal was the other power in South America. It held the Brazilian coast from Santos to Pernambuco.

The coast between the Portuguese and Spanish possessions was known as Wild Coast or Guyana and at that time was left unoccupied by Spain and Portugal. For this reason it was on this coast, where in a first time the attempts of colonization by the Dutch, French and English were concentrated.

– Edmundson “The Dutch in Western Guiana”
English historical review: 1901 Vol. XVI 640 – 675 pp.
An interesting article on the first period of Dutch settlements in Guiana and Tobago. There is also some information about the Courland attempts of colonizing Tobago.

– Goslinga,C.Ch. “The Dutch in the Caribbean & on the Wild Coast 1580-1680”
647 pp. 12 maps Van Gorcum & C. 1971 Assen, The Netherlands.
A detailed and a very interesting and complete study on the Dutch in the Caribbean area: Guyana and Caribbean Islands. This is the vol I of the study.
Index: The beggars and the Broom, dreamers and realists, the tardy interlopers, the truce, the rise of a brilliant star, the battle for salt, the first great designs, the silver fleet, the king’s veins, Pie de Palo, the Dutch pearls, the years of crisis, the decline of a brilliant star, black ebony, “that superb nation”, the Wild Coast, New Walcheren, the last Dutch stand.

– Goslinga, C.Ch. “The Dutch in the Caribbean and in the Guianas 1680-1791”
712 pp. 13 maps Van Gorcum 1985 Assen, The Netherlands
A detailed and a very interesting study on the Dutch in the Caribbean area: Guyana and Caribbean Islands. This is the vol II of the study.
Index: The rise and the decline of the new Dutch West India Company 1675-1770, the Dutch in West Africa, the Company and the colonists on the Curaçao island, the Company and the colonists of the Dutch Leeward islands, the Dutch Caribbean slave trade, the “Kleine Vaart” in the Caribbean, Antillean colonial society, the colonists and the society of Suriname, Surinam: plantation colony, the Surinam Maroons, the Surinam slave trade, Essequibo and Demerara, the Berbice slave rebellion, a tale of two cities: Willemstad and Paramaribo, the Dutch black and red codes, the fall of the West India Company.