Mauritius was discovered in 1505 by the Portuguese navigator Domingo Fernandez, who named it “Ilha do Cerne”, a corruption of Ilha do Cisne, meaning Swan Island. The Portuguese used the island as a fresh food reserve for the ships bound for India.

The first Dutchman visiting the island was Wybrant Warwijck in 1598, who renamed the island after the Dutch stadhouder Maurits. During the first 40 years of Dutch activity in the East, Mauritius was often used by the VOC ships in search of fresh food as a call station, but they never built during these years a permanent settlement.

The main natural resources of the island were ebony and wild animals like the notorious Dodo, pigs, goats and tortoises. In the 1630s the presence of a permanent Dutch settlement on Mauritius was judged necessary by the VOC to prevent the occupation of the island either by the French or by the English company.

Finally the Hollanders settled on the East coast of the island in the south-eastern harbour, which they called “Haven van Warwijck” or “Ooster Haven”, where the town of Vieux Grand Port now stands. Here in May 1638 they built a square-shaped wooden fort with bastions and cannons at each corner, which was named Fort Frederik Hendrik. 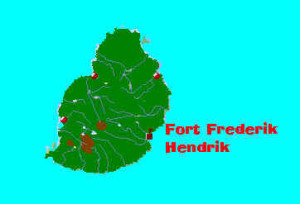 The Dutch settlements on Mauritius

This fort was garrisoned at first by a force of 25 Dutchmen under the command of the first governor: Cornelis Gooyer. The fort was finished on 29 August 1638.

In 1639 a new chief (“Opperhoofd”) was appointed. He was Adriaan van der Stel, the father of Simon, who should become famous as the first governor of the Cape of Good Hope. Simon van der Stel was born on Mauritius during his father’s government of the island.

van der Stel rebuilt the fort and armed it with 14 cannons. The garrison was enlarged to 80 men and the first slaves were imported from Madagascar. To develop this “trade” a Dutch factory was established in the Bay of Antongil (N-E Madagascar) in 1642. This factory was closed at the end of the year 1646. During the van der Stel government several attempts were made to develop agriculture (sugar cane, vegetables, fruit trees), but they all failed because of the rats.

In 1645 Adriaan van der Stel was transferred to Ceylon and Jacob van der Meersch became the new governor. During his government the woodcutting of ebony trees was developed and a five-kilometer road was built in Flacq to facilitate this activity and several burghers settled on the island. In 1655 during the government of Reiner Por there were in the three settlements of the island (Grand Port Bay, Flacq and Trou d’Eau Douce) 100 people, among them planters with their families and slaves and 60 VOC employees. A new attempt to introduce agriculture on a larger scale was made, but this time the cultivated area was again devastated by the rats. This was the coup de grâce to the weak economy of the island. In 1658 the VOC actually decided to abandon the island colony. The last “Opperhoofd” Abraham Evertsz destroyed Fort Frederik Hendrik in 1658 and abandoned Mauritius with the remaining 40 inhabitants.

Between 1658 and 1664 Mauritius was uninhabited except for some ship-wrecked sailors.

In 1663 the VOC ordered the governor of the Cape colony to reestablish the Dutch settlement on Mauritius. In the summer of 1664 a ship under the new governor Jacobus Nieuwlant anchored in the “Haven van Warwijck”, where the ruins of the old Fort Frederik Hendrik were still to be found. The Nieuwlant government was short. He died at the end of May 1665. George Wreede was appointed as “Opperhoofd”. He resumed the ebony cutting and attempts were made to develop farming.

After the death of Wreede in 1673 Hubert Hugo became “Opperhoofd”. He was an excellent commander. He developed farming, reconstructed the fort, built a new church, a saw mill, a tannery and 16 km of road in Flacq. The population of the island increased. The Burghers had spread over the island: in the present area of Flacq (the main settlement), in Black River and in Port Louis.

In 1677 Isaac Lamotius was appointed as new “Opperhoofd” of Fort Frederik Hendrik. The garrison had 55 soldiers and slaves and the Burghers were 32. During the Lamotius government (1677-1692) the last Dodos were killed, a flightless bird, which is endemic to the island.

In 1692 Roelof Diodati became “Opperhoofd”. He was of Swiss-Italian descent. In 1695 a big hurricane devastated the island. Several Burghers lost all their crops and many left the island.

In 1703 the last Dutch “Opperhoofd” of Mauritius was appointed: Adriaan Momber van der Velde. During his government the island economy experienced great misfortune and was reduced to extreme poverty. In 1706 the VOC finally decided to evacuate the island. At that time the Dutch population consisted of 48 VOC employees and 32 Burghers. 5 of the latter were living in Black River, 15 in the north-western harbour and 12 in Flacq. These Burghers had 24 wives and 69 children. There were also 71 slaves. Thus the population amounted to a total of 244 persons. In February 1710 the last Dutchman left Mauritius.

2014-01-11
Marco Ramerini
Previous: A Portuguese fort in Madagascar: the fort near Tolanaro
Next: The German Fort Alte Feste in Windhoek, Namibia