Continued from: The Dutch conquest and the abandonment of the Fort

5.0 THE NEW DUTCH OCCUPATION AND THE RECONSTRUCTION OF THE FORT

During the subsequent years it is likely that the Dutch maintained only a small fortified outpost in Kottiyar Bay 1, but also this is not sure. Sure is that in 1660 the Dutch sent an expedition under the command of van Rhee and Wasch with the purpose to reoccupy Trincomalee, to prevent contacts between the king of Kandy and the English, the latter seemed to have had the intention to establish a small outpost in Kottiyar. The reaction of the king of Kandy was opportune, he immediately sent a large army in order to prevent the Dutch designs. His action was probably a success in reaching his aim. The Dutch withdrew in good order.2

By now the Portuguese were expelled from Ceylon. After the fall of Jaffna in 1658 the Dutch were newly interested in Trincomalee on the occasion of a rebellion at the Kandyan court, happening in 1664. On this occasion Raja Sinha asked for help from the Dutch in patrolling the east coast, to prevent the escape of the rebels, fearing that they might receive aid or flee from one of the ports on the east coast of the island.

In September 1665, the Dutch having received news that indicated that an English ship had arrived in the bay of Trincomalee and had established through an ambassador contacts with the king of Kandy.
They decided apart from patrolling the east coast, as the King had asked for, that it was necessary to reoccupy Trincomalee. To this purpose an expedition of two ships and 100 soldiers under the command of Captain Pierre du Pon was sent. The troops reconstructed the fort on the place where the rests of the old Portuguese fort were still to be found.3

The new fortress of Trincomalee was provided with four main bastions (called “Zeeburg”, “Amsterdam”, “Enkhuizen” and “Holland”) and a platform for the guns (called Cat). The bastions “Amsterdam” and “Zeeburg” were protected by a ditch, which cut the peninsula into two parts, thus isolating the fort from the rest of the city. “Zeeburg” was the larger of the two bastions. It was also the northernmost of the two and was situated along the back bay. Always along the same bay was the platform for the guns called Cat, a wall connecting this platform with the “Zeeburg” bastion and a small gate was situated halfway in this wall. The bastion “Amsterdam” was the southernmost, facing the Dutch Bay and the two other bastions “Enkhuizen” and “Holland” were also facing this bay. These two were connected with the first by a wall. Approximately half way between the bastions “Amsterdam” and “Enkhuizen” the main gate of the fort was situated.4

In 1668 the fortifications of Kottiyar and Batticaloa were reoccupied and improved. In 1670 Pieter de Graauw, who was in command of a company of Dutch troops, extended the Dutch control on a large part of the eastern coast 5, by deals of protection and vassalage with some heads of the eastern coast. But such control was of short duration, just a few months till August 1670, a massive attack of the king of Kandy on all the eastern coast being the reason. The Dutch were forced to shelter themselves in their forts of Trincomalee and Batticaloa.6 In Trincomalee the Dutch lost in a crash with the Kandyans 24 Dutch soldiers and 22 lascarins.7

To be continued by: The French attempt 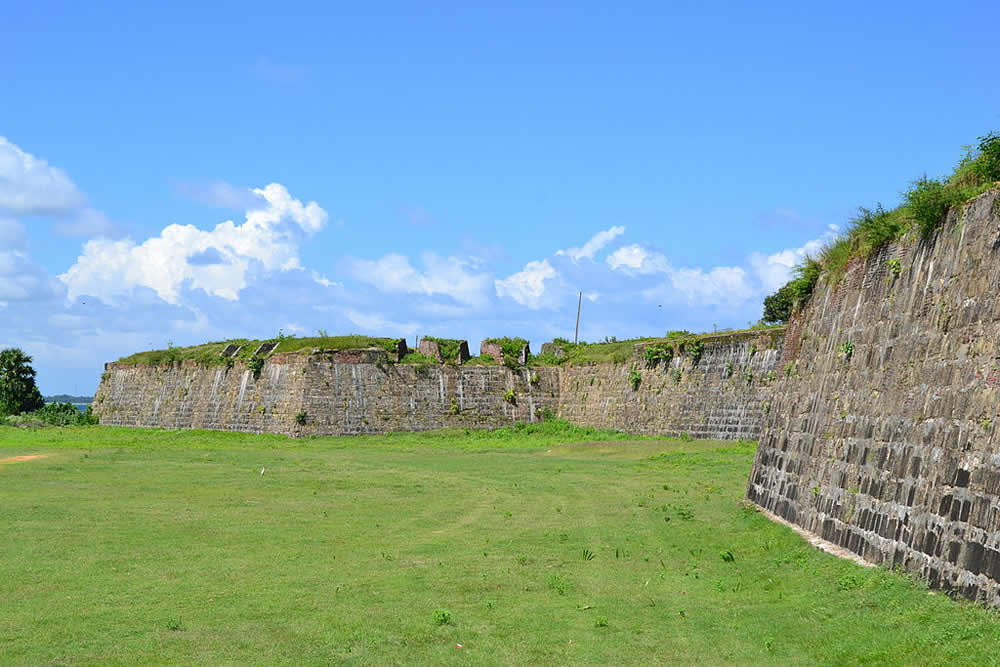