This beautiful and rugged island of the Caribbean (with an area of about 300 square kilometres) lies in front of the delta of the Orinoco River. Its position is a rather strategic one. Indeed, from here one can dominate the coasts of Venezuela as well as that of Guyana and also the Caribbean Sea. Tobago is also full of good bays for anchorage. For these reasons this island was disputed by several European powers in the seventeenth century.

Tobago was discovered by Christopher Columbus (Cristoforo Colombo) in 1498, but Spain was not interested in the island until 1614 when Juan Rodriguez made a colonizing attempt which he abandoned after four months.

In 1628 a Dutch ship with 68 colonists landed on the island (called by them Nieuw Walcheren). They founded a fort called Fort Flushing near today’s Plymouth in the Great Courland Bay. In 1629 and 1632 more ships arrived from Zeeland to strengthen the small Dutch settlement, which now was populated by about 200 colonists. The history of this first colony had a tragic conclusion on 1 January 1637, when a Spanish expedition destroyed the settlement and massacred the colonists. 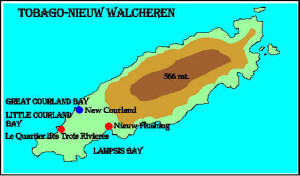 A few months later, in 1637, a Courlandian (Courland was a duchy situated in the present Republic of Latvia) ship with 212 colonists attempted to found a colony on the island, but both attempts and a subsequent one in 1639 ended in failure. In 1639 the English also attempted to found a settlement on Tobago, but the colonists were forced to withdraw in 1640. A renewed English attempt in 1642 met the same fate. In 1642 about 300 Courlanders made a third attempt to colonize Tobago, but the Caribs attacked and killed many of them. The survivors escaped to the Wild Coast (today’s Guyana). In 1647 a third English attempt also failed.

On 20 May 1654, a Courlanders expedition of 80 families and 149 soldiers landed at Great Courland Bay. They renamed the island New Courland and started to build a fort named Fort Jacob. In September 1654 a Zeelandian expedition under Pieter Becquart founded a settlement at Lampsins Bay on the opposite side of the island. This new settlement was named Nieuw Flushing. The Dutch built here three forts. The strongest was called Fort Lampsinsberg, the other two were Fort Beveren and Fort Bellavista.

Thus the island was divided between the two nations. In 1657 reinforcements arrived from Courland and about 120 colonists were added. Meanwhile the Dutch settlement had had a swift growth and in 1658 about 500 Frenchmen settled under Dutch sovereignty. They founded a settlement (named Le Quartier des trois Rivières) in Little Courland Bay not far from the Courlanders colony. By 1658 1,200 persons peopled the Dutch colony.

The Courlanders were in trouble, because the Baltic war was raging in their country and no reinforcements came from Courland. On 11 December 1659 the Courlanders surrendered the colony to the Dutch. The Dutch colony was flourishing and it counted about 1,500 colonists (prevalently Zeelanders and Frenchmen) and 7,000 slaves in 1660. There were three churches and six or seven sugar mills. The island produced sugar, rum and cacao. There were about 120 plantations and 2 rum distilleries.

In January 1666 the colony was forced to surrender to the British pirates from Jamaica. A few days later English troops arrived and assumed official English control of Tobago. A garrison of 50 Englishmen was left on the island. This garrison surrendered to the French in August 1666. A short time later the French must have abandoned Tobago. In fact, when the Dutch Admiral Abraham Crijnssen landed in April 1667, he found the island deserted and the forts and the houses of the colony in ruins. He had the fort restored and left a garrison of 29 men. In December 1668 a Courlandian ship made an attempt to occupy the old site of Fort Jacob, but the Dutch were watchful and the Courlanders escaped. In 1672 about 500 Dutch colonists arrived.

On 18 December 1672 an English expedition totalling 6 ships and 600 men conquered the colony after five or six hours of fight. The British destroyed the colony and the colonists were deported to Barbados. Tobago was again abandoned.

The second peace of Westminster in 1674 gave Tobago back to the Dutch, but they reoccupied the island only on 1 September 1676, when an expedition under the command of Jacob Binckes landed at Klip Bay and a new fort was built near the place where Nieuw Flushing used to stand. The new fort was called Fort Sterreschans; it was a star-shaped fort with four bulwarks. A small outpost was built on a hill overlooking the bay.

In February 1677 Dutch reinforcements (about 150 men) landed, but a few days later a French fleet totalling 24 ships and 4,000 men was sighted. The Dutch had 700 soldiers, 100 colonists and 15 ships anchored in the bay. On 21 February 1677 the French disembarked 1,000 men and attacked the fort but failed. After this on 3 March 1677 the French Admiral Count d’Estrées decided to attempt a dangerous attack on the Dutch by land and sea. The battle was destructive for both parties and the Dutch remained masters of the fort, but only three Dutch ships and 400 men survived the battle. All the French ships were damaged and four were lost. After this battle the French troops left Tobago.

On 6 December 1677 a new French fleet totalling 21 ships under d’Estrées landed on Tobago. The Dutch now numbered only 700 men and 5 ships. The French attacked the Dutch fort from the land side and a French “fire ball” fell near the powder magazine of the fort, causing an explosion. This terrific explosion killed Binckes and about 250 of his men. As the Dutch survivors surrendered, the French destroyed the remains of the Sterreschans and abandoned the island. This marked the end of the Dutch attempts to make Tobago a Dutch colony.

– Edmundson “The Dutch in Western Guiana” English historical review: 1901 Vol. XVI 640 – 675 pp.
An interesting article on the first period of Dutch settlements in Guiana and Tobago. There are also some information about the Courland attempts of colonizing Tobago.

– Goslinga,C.Ch. “The Dutch in the Caribbean & on the Wild Coast 1580-1680” 647 pp. 12 maps Van Gorcum & C. 1971 Assen, The Netherlands.
A detailed and a very interesting and complete study on the Dutch in the Caribbean area: Guyana and Caribbean Islands. This is the vol I of the study.
Index: The beggars and the Broom, dreamers and realists, the tardy interlopers, the truce, the rise of a brilliant star, the battle for salt, the first great designs, the silver fleet, the king’s veins, Pie de Palo, the Dutch pearls, the years of crisis, the decline of a brilliant star, black ebony, “that superb nation”, the Wild Coast, New Walcheren, the last Dutch stand.

– Goslinga, C.Ch. “The Dutch in the Caribbean and in the Guianas 1680-1791” 712 pp. 13 maps Van Gorcum 1985 Assen, The Netherlands
A detailed and a very interesting study on the Dutch in the Caribbean area: Guyana and Caribbean Islands. This is the vol II of the study.
Index: The rise and the decline of the new Dutch West India Company 1675-1770, the Dutch in West Africa, the Company and the colonists in the Curaçao islands, the Company and the colonists of the Dutch Leeward islands, the Dutch Caribbean slave trade, the “Kleine Vaart” in the Caribbean, Antillean colonial society, the colonists and the society of Suriname, Surinam: plantation colony, the Surinam Maroons, the Surinam slave trade, Essequebo and Demerara, the Berbice slave rebellion, a tale of two cities: Willemstad and Paramaribo, the Dutch black and red codes, the fall of the West India Company.