The history of the Dutch in Ceylon began during the command of Admiral Joris van Spilbergen on 31 May 1602, when the first Dutch ships, which visited Ceylon, anchored off the port of Batticaloa.

The Portuguese under Afonso de Albuquerque started right from the beginning with the experiment of a colonisation based on settlements of Portuguese citizens called “casados”. Since the Portuguese women were few, mixed marriages were encouraged between the Portuguese and the Asians. Albuquerque tried to create a new Portuguese nation in Asia to compensate for the lack of people from Portugal.

This method of settlement was extremely successful. In fact, after a century of this colonisation, in practically every outpost of the empire, there were colonies of mixed Portuguese, who spoke Portuguese, were Catholic and were better suited to the tropical climates than the European-born Portuguese. Thanks to this strategy, the Portuguese succeeded in withstanding the siege of the Dutch in Ceylon for nearly 60 years.

After their conquest the Dutch also attempted to found some colonies of Dutch citizens dubbed “Burgher”. This was particularly attempted for the first time under Maetsuyker (governor from 1646 to 1650), but at the end of his government and later under Van Goens (governor from 1662-1663 and 1665-1675), there were only 68 married Free-Burghers on the island. Such policy was clearly a failure as only a few Dutch families settled on the island. During the first 30 years of Dutch rule in Ceylon, the Burgher community never exceeded 500 in number and it was mainly composed by sailors, clerks, tavern-keepers and discharged soldiers.

The Dutch East India Company (VOC) encouraged the Burghers by supporting this type of emigration to Ceylon in any case: Burghers alone had the privilege to keep shops, were given liberal grants of land with the right of free trade. Whenever possible they were preferred to natives for appointment to an office. Only Burghers had the right of baking bread, butchering and shoemaking. Most of them were civil servants of the Company. The marriage between a Burgher and a native woman – often an Indo-Portuguese woman – was only permitted, if she professed the Christian religion. However, the daughters of this union had to be married to a Dutchman. Like Van Goens said: “… so that our race may degenerate as little as possible”.

In the XVIIIth century a growing European community (a mixture of Portuguese, Dutch, Sinhalese and Tamil) had developed in Ceylon. They dressed like a European, were adherents of the Dutch Reformed Church and spoke Dutch or Portuguese. With the passing of time, the Burgher community developed into two different communities: Dutch Burghers and Portuguese Burghers.

The Dutch Burghers were those, who could demonstrate European ancestry (Dutch or Portuguese) through the male line, were white, Dutch Reformed and Dutch-speaking. The Portuguese Burghers (called later Mechanics) were those, who had a supposed (but not sure) European ancestry, had dark skin, were Catholics and spoke Creole Portuguese. The European community supplied the clergy (predikante) of the Dutch Reformed Church. In the last decades of Dutch rule on the island, the Burghers formed a detachment of citizen soldiers. They defended the ramparts of Colombo during the fourth Anglo-Dutch War.

Although there are no demographic studies available on the Burgher community in Ceylon during the Dutch period, it is clear that the growth of the community was constant. A small, but steady influx of newcomers from Europe mixed with the families, who had settled on the island for generations. Thanks to this, the Burgher community was able to retain its open character and the heterogeneous cultural traditions.

By the end of the British rule the Dutch Burgher community had lost its influence and privileges, and many Burghers emigrated to Australia or Canada, especially after the declaration of Sinhala as the official language (1956) of the country by Solomon Bandaranaike. In spite of this the Dutch Burgher Union of Ceylon is still in existence in Colombo to this day. The Dutch Reformed Church is now called the Presbyterian Church of Ceylon, the membership presently being 5,000. On the whole island you find 24 congregrations and 18 ministers of this Church. During the last 40 years the Church has lost much of its leadership and membership due to mass emigration of the Dutch Burgher community.

THE BURGHERS COMMUNITY IN THE SRI LANKA CENSUS 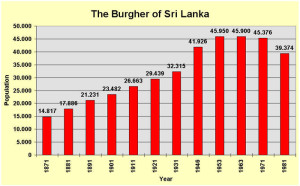 The Burghers of Sri Lanka. Author and Copyright Marco Ramerini

At the census of 2001 the Burghers (Dutch and Portuguese) were 35.283 (0,2 % of the population), from the result of this census were excluded the areas of Jaffna, Trincomalee and Batticaloa.

At the census of 2011 the Burghers (Dutch and Portuguese) were 37.061 (0,18 % of the population), from the result of this census were excluded the areas of Jaffna, Mannar, Vavuniya, Mullaitivu, Kilinochchi, Batticaloa and Trincomalee.

– Goonewardena, K “A New Netherlands in Ceylon. Dutch attempts to found a colony during the first quarter century of their power in Ceylon” Ceylon Journal of Historical and Social Studies, 1959, 2:2 pp. 203-244