In the early 19th century Russian fur traders established trading centers from Siberia into the North American subcontinent, Russian cargo vessels regularly transecting the northern Pacific Ocean. In January 1815 a Russian-American Company vessel, named “Bering”, that traded furs for food throughout the Hawaiian Islands, was shipwrecked at Waimea, Kauai. The ship and the cargo were confiscated by Kaumualii, king of Kauai. Subsequently the Russian-American Company sent an agent, Georg Anton Schäffer (a German surgeon of one of the Company’s vessels), to diplomatically recover the company’s lost properties.

Schäffer’s mission was to gain the confidence of Kamehameha I, who had acknowledged the right to sovereignty of Kaumalii in 1810. Once the bond existed between Schäffer and Kamehameha I, he was to reveal the true character of his mission and requested Kamehameha’s assistance in securing compensation from Kaumualii for the confiscated cargo. Despite opposition from a group of American traders, who had gained Kamehameha’s trust. By early 1816 Schäffer had been successful in obtaining fishing rights, livestock and a land grant to establish a post on Oahu.

Kamehameha I, however, did not lend the anticipated assistance. Georg Anton Schäffer tried an alternate plan: in May 1816 Schäffer went to Hawaii, and then to Kauai, dealing directly with Kaumualii. He was successful in securing a contract guaranteeing payment for his confiscated cargo.

On 1 July 1816 Schäffer also entered into a secret treaty with Kaumualii, in which he pledged arms and ships for an invasion of the islands of Oahu, Lanai, Maui and Molokai, which Kaumualii felt were his. In return Kaumualii promised one half of the island of Oahu and all the sandalwood on Oahu and Kauai to the Russians. They would also be permitted to build factories on all of Kaumualii’s newly conquered islands.

At Hanalei (Princeville) Schäffer opened a trading post and started the construction of a house. On 12 September 1816 Schäffer started the works of fortification of fort Elizabeth on a bluff overlooking the mouth of the Waimea River near Hanalei (Princeville). On October 1816 Schäffer constructed two earthwork forts, one named Fort Alexander in honor of the Tzar and the other known as Fort Barclay. Hanalei was renamed Schäfferthal.

Fort Elizabeth is the only Russian fort in Hawaii that is still visible today. It is situated on the east bank at the mouth of the Waimea River.It was built between 1816 and 1817 by the Russian-American Company in alliance with the king of Kauai, Kaumualii. Georg Anton Schäffer designed the fort and directed the works that were done by a Hawaiian workforce While construction proceeded, Schäffer received the message that his crew had been expelled from Oahu for building a fort and for raising a Russian flag on it. Alarmed by all these activities before the year was over, the natives of Hanalei had revolted, leveled the forts at Hanalei and burnt a distillery, which had just been built and killing one of the Aleutian workers employed by Schäffer.

On 8 May 1817 the Russians were expelled from Hawaii and the Hawaiians took over the fort. They finished the fort and made modifications and additions. The fort was occupied by Hawaiians until it was dismantled in 1864 by order of the Hawaiian government. The hexagonal star-like fort had walls reaching 3,66 metres in height and 91,44 metres in diameter and consisting of three layers: an earthen embankment, a layer of lava rock, and a hard-packed earth layer with a stone walkway atop. The compound included a guardroom, magazine, barracks, cannon emplacements and a trading post. Only the remains of the outer walls are left. 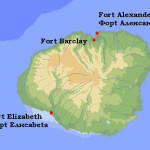 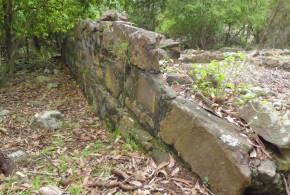